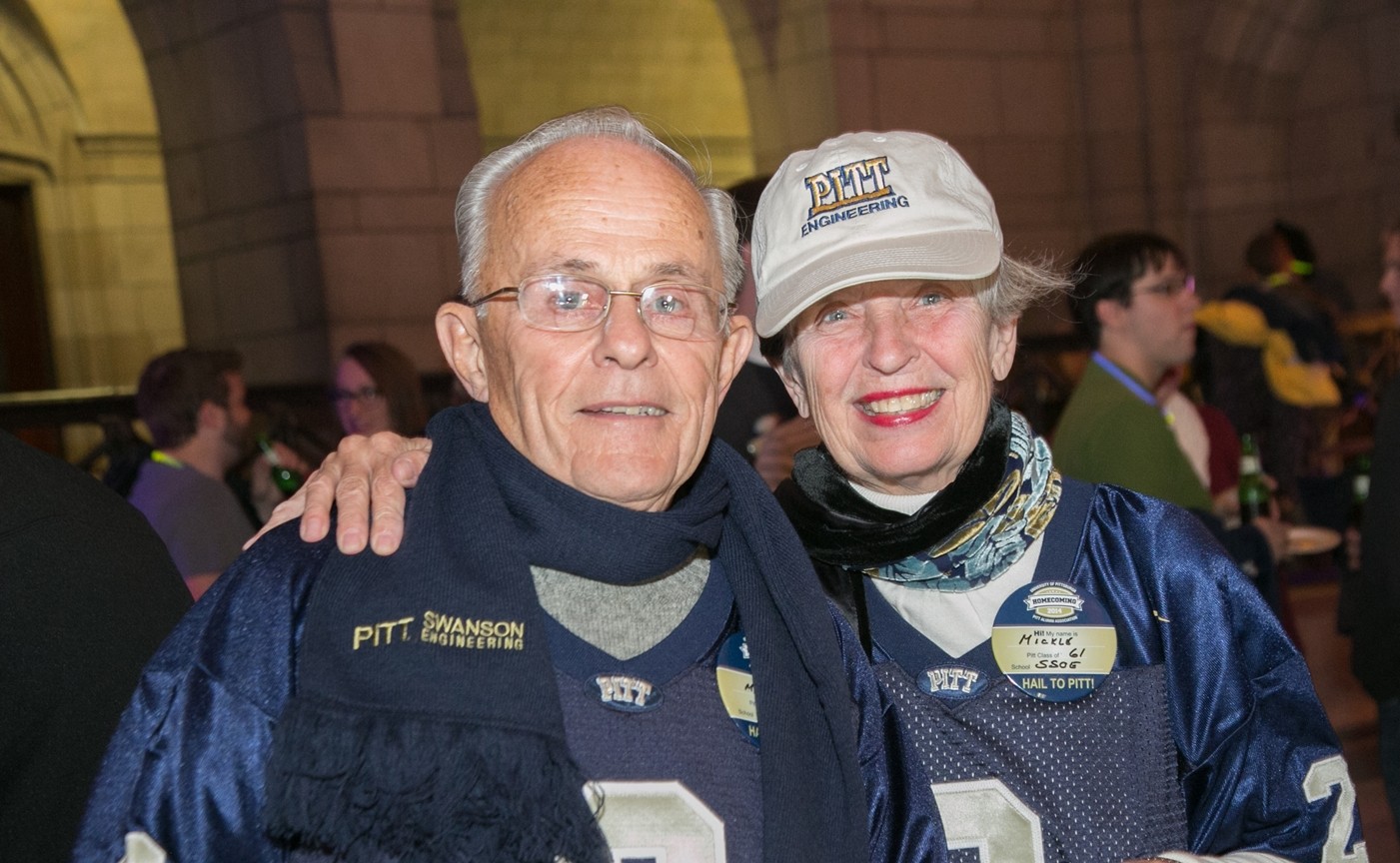 Endowment income is to be used to provide support for tuition and other educational expenses of student(s) who are transferring from the University of Pittsburgh at Johnstown to the Swanson School of Engineering. This Scholarship is renewable for up to four years, provided that the recipient continues to meet the University's academic standards. This fund will be administered by the Dean of the Swanson School of Engineering or his/her designee.

Obituary by Marty Levine printed in the April 30, 2015 issue of The University Times . Reposted online with permission. Original post may be viewed here . Pictured: Marlin and Nancy Mickle at Pitt's 2014 Homecoming.

Nancy Coleman Mickle's marriage to Marlin Mickle, an emeritus professor of electrical and computer engineering who died April 14, 2015, seemed to have a storybook quality, as seen from both inside and out.

Nancy had been widowed in 2004 and moved to Pittsburgh part-time the next year to be near her son and his family. Marlin Mickle lived across the hall from her, but the two didn't meet until 2011.

"It's really because I came crashing out of the elevator and nearly knocked him down," she recalls. "He kept saying there was something about my 'Oops!'" That's when he approached her for a first date. They were married Dec. 12, 2012, exactly a year later.

It was Marlin Mickle's first marriage, recalls friend and colleague Albert J. Novak Jr., vice chancellor for Institutional Advancement, "and he was like a teenager. They were holding hands and walking up and down Fifth Avenue. He sure had a happy last few years with Nancy."

Born July 5, 1936, in Windber, a suburb of Johnstown, Marlin Mickle began his first degree studying at Pitt-Johnstown in 1958 before transferring to the Pittsburgh campus after two years. "He was indebted to Pitt," Nancy Mickle says, having earned all his degrees here: a BS in electrical engineering in 1961, followed by an MSEE in 1963 and a PhD in 1967. He had already joined the Pitt faculty in 1962.

"He had no money for college but he wanted an education," Nancy says. So he enlisted in the Air Force, then a branch of the Army, as a radar technician, stationed on Cape Cod, Massachusetts. He was supporting his mother at the time. He had been helping to do so since the age of 10, when she was widowed; some of his early jobs included long-time gigs as a drummer in local dance bands, beginning at age 12.

In his academic career, Mickle was author, co-author or co-editor of more than 20 books and more than 200 other publications. He had more than 40 patents for such innovations as a magnetically levitated gyro and a gyro optical sensor, which resulted in seven spin-off companies following University licensing. One of his inventions won the Best of Show for Emerging Technologies at the Consumer Electronics Show in Las Vegas in 2007.

His awards included the 1988 Systems Research and Cybernetics Award from the International Institute for Advanced Studies in Systems Research and Cybernetics, the Carnegie Science Center Award for Excellence in Corporate Innovation in 2005, a Life Fellowship from the IEEE (Institute of Electrical and Electronics Engineers), Pitt's 225th Anniversary Medallion Award, the 2011 Ted Williams Award from the Association for Automatic Identification and Mobility and the Pitt Innovation Award, 2005-12.

His work was supported by more than 135 grants through the years, from private companies and foundations as well as such federal agencies as the Department of Housing and Urban Development, the National Science Foundation, the U.S. Army, NASA and the National Institutes of Health.

In more recent years, Mickle was best known for pioneering the application of radio frequency energy waves to create wireless devices such as communication networks, battery chargers and radio frequency identification (RFID) tags for use in retail technology. He oversaw several laboratories for developing practical radio frequency applications and directed the RFID Center of Excellence.

In 2004 he endowed a pair of faculty chairs in his department to honor his parents, Ruth E. Mickle and Howard T. Mickle. His $2.5 million bequest was one of the largest gifts a faculty member had made to the University at that time.

He retired from the Swanson School of Engineering in 2013.

Cain joined the school as an assistant professor in 1990; the pair co-advised students and worked together when their research coincided. That included working on RFIDs and writing books.

"Over his entire career, he had a tremendous impact on research," says Cain. "He was a tremendous faculty member. There's no other way to phrase it."

IA's Novak had known Mickle since 1997, when Novak came to Pitt from Carnegie Mellon University. He and Mickle had exchanged emails about an upcoming visit of Hewlett-Packard scientists to Mickle's lab. When Novak joined the visitors, he met Mickle in person for the first time. "I was used to working with much younger researchers," Novak recalls. Mickle was 58 at the time. But, Novak says, "I heard all this drive in his voice, all this energy. I thought, 'Whoa!' He had these HP people eating out of the palm of his hand. I thought, if everyone at Pitt was like Marlin Mickle, I'm going to be just fine."

Novak became so friendly with Mickle that he purchased a condominium in Mickle's building.

"He was just a good citizen," Novak says, noting Mickle's support for everything from their condo association to Shadyside Presbyterian Church, where Mickle was an elder. Mickle also helped the Asbury Heights assisted-living facility in Mt. Lebanon build the Ruth E. Mickle Library. He was a good citizen of the University, too, Novak says: "He was active on committees, programs and projects outside his laboratory and his discipline.

"Marlin was a beloved figure and we are truly going to miss him," he adds. "He was just an outgoing, dedicated person. When I grow up I want to be like him."

Even following his retirement, Nancy Mickle and her husband loved going to "everything at Pitt," she recalls. "We used to say, 'All you have to do is get dressed up and you will find a Pitt event to go to.' He loved parties and having someone on his arm." Previously, he joked, at events at then-Chancellor Mark A. Nordenberg's home, he had ended up mainly talking to the Nordenbergs' large German shepherd, Bear.

Nancy Mickle says her husband especially enjoyed running into former students who had "so many marvelous memories of courses with him" and who had gone on to prominent careers. "He was a researcher, a scholar, an inventor, but I always think of him as a teacher.

"I don't know anyone who cared so much about people and always did the right thing. He was a gem."

After inviting the local Boilermaker Jazz Band to play at their wedding - Nancy's son is the band's drummer - she surprised attendees by asking Marlin to play a song with the band. "He hadn't picked up a pair of drumsticks in 50 years, but he had no problem," she says.

"No matter what the issue, he would give it his profound attention, creativity and intelligence," she says. "Apart from all those academic honors and awards, he was just a really sweet man."

Besides his wife, Mickle is survived by her son, Richard Strong, and his wife, Melissa Kalarchian, and their children Max and Kate.

A memorial service will be held at 11 a.m. May 15 at Shadyside Presbyterian Church .