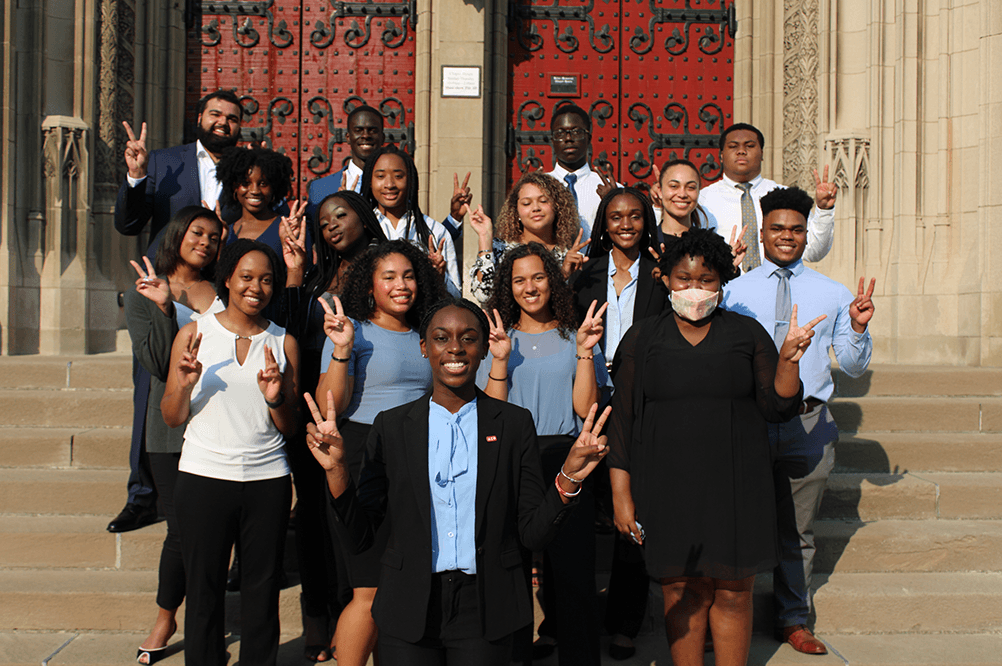 Validation After a Challenging Year

Anaya Joynes, University of Pittsburgh senior industrial engineering major and president of the Pitt chapter of the National Society of Black Engineers (NSBE), was watching with anticipation from her apartment while the awards at the NSBE 48th Annual Convention in Anaheim, Calif., were being announced.

She asked Vice President and bioengineering senior Anna Kelly, who had traveled to the event, to call her on FaceTime so she could witness her chapter’s in-person perspective as well as the official Zoom broadcast. It was behind this array of screens that she learned the Pitt chapter had won the Regional Chapter of the Year Award.

“I was in my apartment watching on two screens, just going crazy,” said Joynes. “It was validation—we put in a lot of work this year to provide structure to how we’re operating after being virtual throughout the pandemic.”

Her hybrid conference experience was somewhat appropriate following a very difficult couple of years of pandemic life, navigating online classes and NSBE events. Not only did NSBE need to learn to how to host online and hybrid events and meetings, but they also had to navigate how and when to transition back to in-person events. This part was tricky—especially when many members have spent the first few years of their college experience completely online.

“It felt amazing and humbling to get that award. And it felt like a relief, as well, because we really did work hard this year, especially with it being the first year completely in-person for the majority of the school year,” recalled Kelly, who traveled to the conference with 11 other NSBE members. “We worked hard to put on programs where members could feel they belong and feel like they’re being developed in a different way. Going back to in-person took an emotional and mental toll, especially on freshmen, and we all had to balance taking care of ourselves and creating beneficial programming and outreach.”

The Regional Chapter of the Year Award celebrates the chapter in each of six regions that excels in membership and events. (The region Pitt belongs to includes 149 chapters from eight U.S. states, Europe, North Africa and the Middle East.)

Among the Pitt chapter’s proudest recent accomplishments was organizing A Walk for Education last year, which is an annual event to increase STEM and college exposure through workshops for K-12 students. For the first time, the event was entirely virtual, with over 80 students signing on from all over the country to learn about STEM through workshops.

“To me, that was an amazing experience, because people from all over the country were logging onto a Pitt event,” said Kelly. “We spent hours planning, and we got good feedback. But hearing, ‘I want to get into STEM,’ or ‘I want to be an engineer’? I felt we had a real impact on people who might go into STEM because of our event. That’s my proudest moment from this year.” 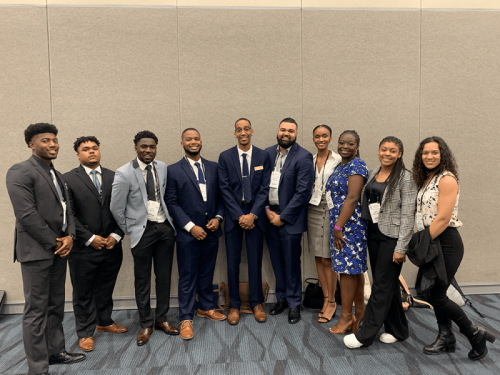 For Pitt NSBE members, the organization is more than a professional development opportunity, though it is certainly that, too. It’s a space where they can feel safe to be themselves and connect with others who have had the same experiences as them.

“I joined NSBE because I knew I would need a space I’d be comfortable in at Swanson, because Pitt is definitely a PWI (predominantly white institution). I needed to find people who felt like a family and understood where I was coming from, as well as professional development and leadership development,” said Kelly. “That’s why I got involved, but I stayed because I made friends and was pushed to be a better person and better leader.”

Yvette Moore, the group’s advisor and director of Pitt EXCEL, has been a driving force in supporting NSBE students and leadership through a difficult few years.

“This year’s NSBE leaders were really their Ancestors’ Wildest Dream! They pushed the envelope on what it meant to really support, encourage, nurture, and groom the next generation of leaders,” said Moore. “I am so proud of the heart that the organization and its leaders had. They went above the call of duty to give back to their community. Even in the toughest of times, they stayed true to the mission. As an advisor to the chapter, I learn as much as I may teach, and that is the beauty of relationship!”

“We’re so appreciative to Ms. Moore for sticking with us and talking to Anna and me about how to support the executive board and general body coming out of the pandemic,” said Joynes. “She pushed us to think about them and not just ourselves. She’s a huge reason we won and even have a board and members.”

For both Kelly and Joynes, moving on from their leadership positions in NSBE is bittersweet, but they’re confident in the next generation of leaders to continue their legacy. NSBE played an important role guiding and supporting its members through a very difficult time, and Joynes feels like the next generation will carry forward and expand upon that mission.

“I was telling Ms. Moore that now I really feel like I’ve made an impact on the chapter,” Joynes said. “Seeing my own mentees now running for the top five positions, I think about how I was molded and mentored by my predecessors. Being in a NSBE leadership position isn’t easy, but I see their enthusiasm and willingness to lead. It feels like a great success to have been someone who made it seem fun and interesting, someone who made them want to run, too.”

Validation After a Challenging Year