PITTSBURGH (May 4, 2017) ‚Ä¶ Hydrogen powered fuel cell cars, developed by almost every major car manufacturer, are ideal zero-emissions vehicles because they produce only water as exhaust. However, their reliability is limited because the fuel cell relies upon a membrane that only functions in when enough water is present, limiting the vehicle‚Äôs operating conditions.

Researchers at the University of Pittsburgh‚Äôs Swanson School of Engineering have found that the unusual properties of graphane ‚Äď a two-dimensional polymer of carbon and hydrogen ‚Äď could form a type of anhydrous ‚Äúbucket brigade‚ÄĚ that transports protons without the need for water, potentially leading to the development of more efficient hydrogen fuel cells for vehicles and other energy systems.

Hydrogen fuels cells are like a battery that can be recharged with hydrogen and oxygen. The hydrogen enters one side of the fuel cell, where it is broken down into protons (hydrogen ions) and electrons, while oxygen enters the other side and is ultimately chemically combined with the protons and electrons to produce water, releasing a great deal of energy.

At the heart of the fuel cell is a proton exchange membrane (PEM). These membranes mostly rely on water to aid in the conduction of protons across the membranes. Everything works well unless the temperature gets too high or the humidity drops, which depletes the membrane of water and stops the protons from migrating across the membrane. Dr. Johnson explains that for this reason, there is keen interest in developing new membrane materials that can operate at very low water levels‚Äďor even in the complete absence of water (anhydrously).

‚ÄúPEMs in today‚Äôs hydrogen fuel cells are made of a polymer called Nafion, which only conducts protons when it has the right amount of water on it,‚ÄĚ says Dr. Johnson. ‚ÄúToo little water, the membrane dries out and protons stop moving. Too much and the membrane ‚Äúfloods‚ÄĚ and stops operating, similar to how you could flood a carbureted engine with too much gasoline,‚ÄĚ he added.

Dr. Johnson and his team focused on graphane because when functionalized with hydroxyl groups it creates a more stable, insulating membrane to conduct protons. ‚ÄúOur computational modeling showed that because of graphane‚Äôs unique structure, it is well suited to rapidly conduct protons across the membrane and electrons across the circuit under anhydrous conditions,‚ÄĚ Dr. Johnson said. ‚ÄúThis would enable hydrogen fuel cell cars to be a more practical alternative vehicle.‚ÄĚ

About the Johnson Research Group
The Johnson Research Group at the University of Pittsburgh uses atomistic modeling to tackle fundamental problems over a wide range of subject areas in chemical engineering, including the molecular design of nanoporous sorbents for the capture of carbon dioxide, the development of catalysts for conversion of carbon dioxide into fuels, the transport of gases and liquids through carbon nanotube membranes, the study of chemical reaction mechanisms, the development of CO2-soluble polymers and CO2 thickeners, and the study of hydrogen storage with complex hydrides. ¬†

Illustration above and below: In computer simulations at Pitt, graphane provides a water-free "bucket brigade"¬†to rapidly conduct protons across the membrane and electrons across the circuit. (Credit: A. Bagusetty/University of Pittsburgh; Rick Henkel) 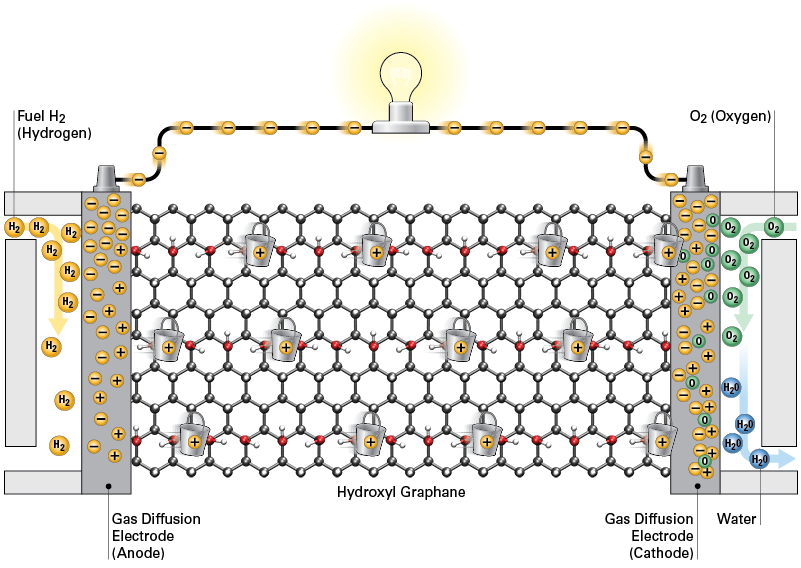 Getting it to stick: grabbing CO2 out of the air
Using Artificial Intelligence to Build a Better Organoid
World Congress of Particle Technology Recognizes George Klinzing with Lifetime Achievement Award
The "Cellular" Network
Extending an Alliance of Innovation
Gut in a Capsule - The Microbiome as Medicine
Some modules are disabled because cookies are declined. Accept cookies to experience the full functionality of this page.
ACCEPT COOKIES
We use cookies to optimize the website, no personal information is stored. Learn more
DECLINE COOKIES ACCEPT COOKIES