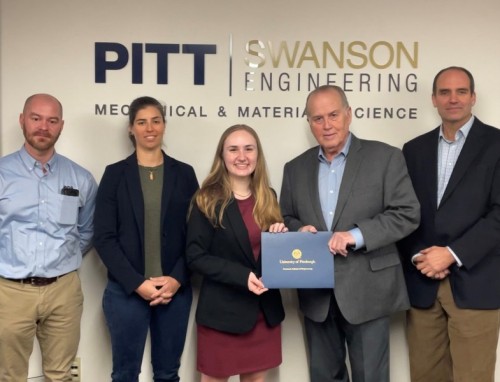 The Robert E. Rumcik ’68 Scholarship in Mechanical and Materials Engineering was recently awarded to Emily Grugan, a junior in the materials science & engineering (MSE) program. The scholarship is intended for two consecutive academic years and Grugan joins MSE senior John Davison, who first received his scholarship as a junior in 2020.

The scholarship is based on academic merit, an aspirational interest in metallurgy, and leadership qualities. Selection was based on an interview process conducted by the MEMS Department. The scholarship will cover tuition costs for the school year for both recipients.

The namesake of the scholarship, Robert Rumcik, retired as President of ELLWOOD Quality Steels at the ELLWOOD Group, Inc. in 2014. He earned a BS in Metallurgy from the University of Pittsburgh in 1968 and in 2000 he received a Distinguished Alumni Award from the Swanson School of Engineering in recognition of his significant career achievements. The ELLWOOD Group Inc. established this endowed scholarship in appreciation for Mr. Rumcik’s commendable service to the company.