For Those Too Tired to Brush 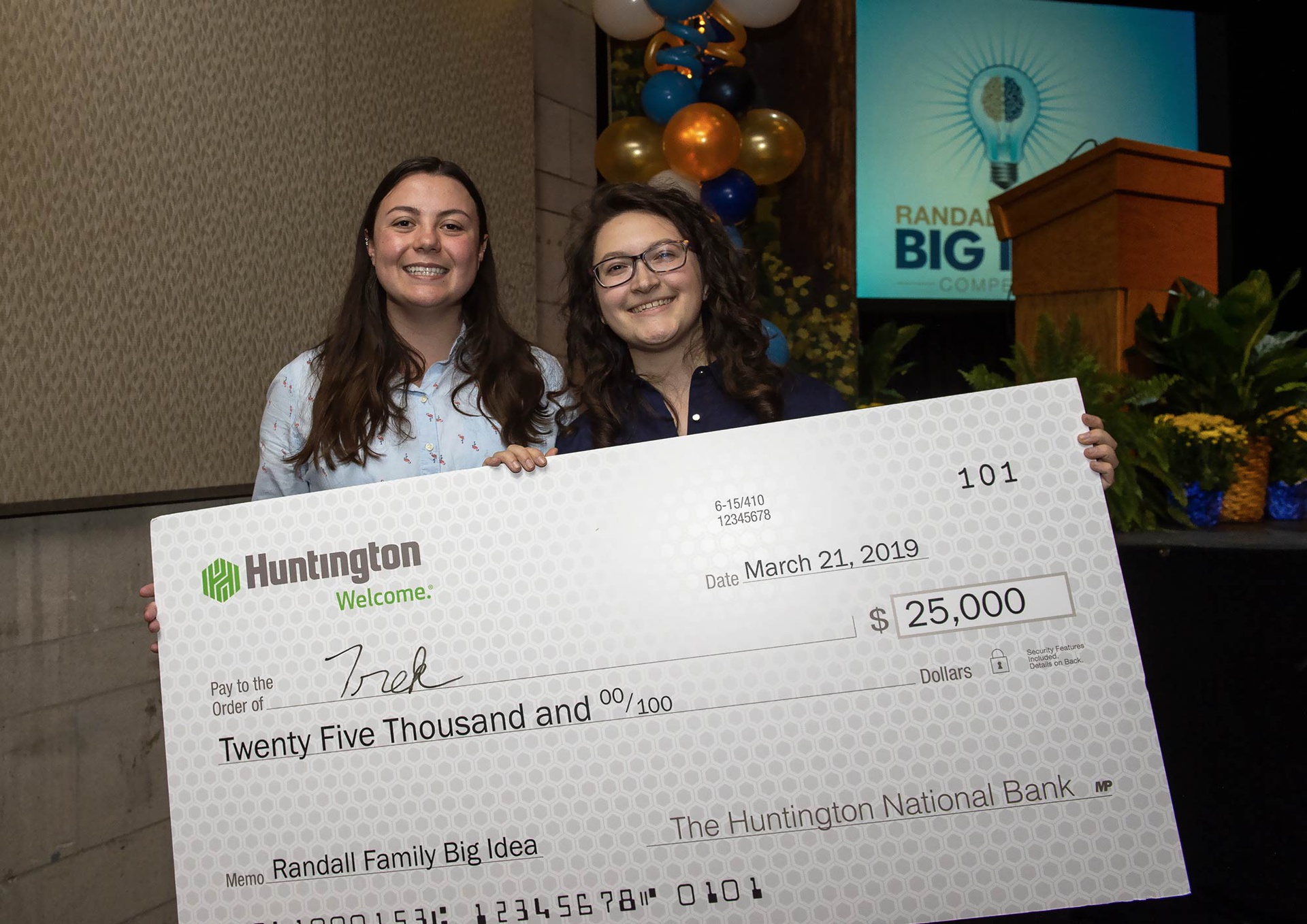 Emily Siegel, a Pitt senior majoring in chemical engineering and biological sciences, admits she’s part of a generation of ever busy, on-the-go multitaskers.

Like many people her age, she’s fallen into bed after a long day of classes and late night of studying without even brushing her teeth, too drained to get up.

The exhausting experience has propelled Siegel’s entrepreneurial path. In a product design class last fall, chemical engineering professor and veteran innovator-entrepreneur Eric Beckman gave an assignment: “He challenged us to think of a problem and come up with a product to solve it,” she said.

The memory of those multiple late nights sparked her idea.

“If I had something on my nightstand that I could use right then…” she thought.

Siegel’s attention-grabbing pitch cites a study by insurer Delta Dental that leaves little doubt that there’s a real problem for Trek to solve: The research found that 37 percent of adults ages 18 to 24 have gone two or more days without brushing their teeth.

Siegel pitches Trek as better than what’s on the market today: It removes and prevents plaque, something ordinary gum can’t do, she said. “And it’s better for the environment because it creates no plastic waste, unlike disposable single-use toothbrushes. It’s 100% biodegradable.”

Siegel envisions that this product not only will benefit busy millennials, but also will appeal to travelers, members of the military and people in places where clean water is difficult to come by.

Trek took the top prize in the most recent Big Idea Blitz, a 24-hour event in which student innovators recruit fellow students to their teams and work with Innovation Institute entrepreneurs-in-residence to develop their ideas, understand the market need and hone their pitches.

The Randall Family Big Idea competition, coordinated by the University of Pittsburgh Innovation Institute, is open to all Pitt students from first-year through postdoc.

Established in 2009 by Pitt alumnus Bob Randall (A&S ’65) and family, the competition is the region’s largest student innovation and entrepreneurship program.

The annual competition kicks off in February, and culminates in a final round in March, in which 50 teams vie for a total of $100,000 in prize money.

That’s where the product became Trek, as Siegel — with only five minutes left to complete her pitch — hurriedly searched for synonyms for “on-the-go” and found the short and sweet name that connotes being on the move.

In March, Siegel paired up with Lauren Yocum, a biology major, as Team Trek to compete in the Randall Family Big Idea Competition. They finished first among 50 finalists.

Sam Bunke, a chemical engineering major, who, like Siegel and Yocum will graduate in December, has joined the team to further advance the product.

Trek’s prize money — $1,500 from the Big Idea Blitz and the $25,000 Randall Family Big Idea Competition grand prize — are going toward further development of this idea around which Siegel intends to create a company and an entrepreneurial career. Her summer plans include participating in Pitt’s Blast Furnace student accelerator.

Siegel’s drive and desire to take this product to market were key factors in the Big Idea Center’s decision to send Trek to represent Pitt in the ACC InVenture Prize competition set for April 16-17 at North Carolina State University. The choice was made before the Randall Family Big Idea Competition winners were selected.

“The Randall judges’ agreement is added confirmation that Trek is a strong competitor,” Carryer said.

The ACC InVenture Prize is an innovation competition in which teams of undergraduates representing Atlantic Coast Conference universities pitch their inventions or businesses to a panel of judges in front of a live audience. Five finalists will compete for a total of $30,000 in prizes.

Innovation Institute entrepreneur-in-residence Don Morrison, who mentored Trek through the Randall Family Big Idea Competition, is helping the team hone its pitch and business model in anticipation of this next challenge.

Morrison, former CEO of American Eagle Outfitters, is committed to helping young entrepreneurs by being the mentor he never had.

“I had great business mentors who helped me understand retail, but I didn’t have an entrepreneurial mentor. Throughout my career I developed innovations that solved real problems for my companies. My solutions could have been taken to market to solve the same problem for other retailers. That’s why I’m passionate about paying it forward through entrepreneurial mentorship,” Morrison said.

“The Trek team is very coachable and passionate about what they’re doing. Their idea solves a real problem. These are key ingredients for success,” he said.

“I think that Trek really is a big idea.”

The Randall Family Big Idea competition, coordinated by the University of Pittsburgh Innovation Institute, is open to all Pitt students from first-year through postdoc.

Established in 2009 by Pitt alumnus Bob Randall (A&S ’65) and family, the competition is the region’s largest student innovation and entrepreneurship program.

The annual competition kicks off in February, and culminates in a final round in March, in which 50 teams vie for a total of $100,000 in prize money.

Read more about this year’s winning teams on the Innovation Institute blog, or take a peek at the finalists’ pitch videos.

For Those Too Tired to Brush