Pitt Engineers Get First Look at Next Project Bound for ISS

The STP-H6 pallet containing the University of Pittsburgh SSIVP project sits in the background underneath a black cellophane wrapper at NASA Kennedy Space Center in Florida. In February 2019, the pallet will travel to the ISS on a SpaceX rocket. Credit: NASA
H6 Camera

PITTSBURGH (October 29, 2018) … Computer and electrical engineers at the University of Pittsburgh Swanson School of Engineering got a sneak peek at their new space supercomputer as it finishes final integration testing before heading to the International Space Station (ISS).

The photos, which were taken by an engineer at NASA Kennedy Space Center, show the Space Test Program-Houston 6 (STP-H6) pallet featuring a hybrid and reconfigurable space supercomputer developed at Pitt. The spaceflight computer is the first of its kind and is supported by dual high-resolution cameras capable of capturing five megapixel images of Earth.

“This new research experiment and testbed is called Spacecraft Supercomputing for Image and Video Processing, or SSIVP,” explains Dr. Alan George, the Mickle Chair Professor of Electrical and Computer Engineering (ECE) at the Swanson School. “Space is the ultimate challenge, where systems face big-data demands in an extreme environment with limited power, size, and weight.  Our SSIVP system represents a leap forward for high-speed computing in space.”

Dr. George is the founder of the National Science Foundation (NSF)Center for Space, High-performance, and Resilient Computing (SHREC). The research center focuses on “mission-critical computing,” a field of ECE that includes space computing, high-performance computing and data analytics, and resilient computing to ensure system dependability at high speed and low power in harsh environments like outer space. 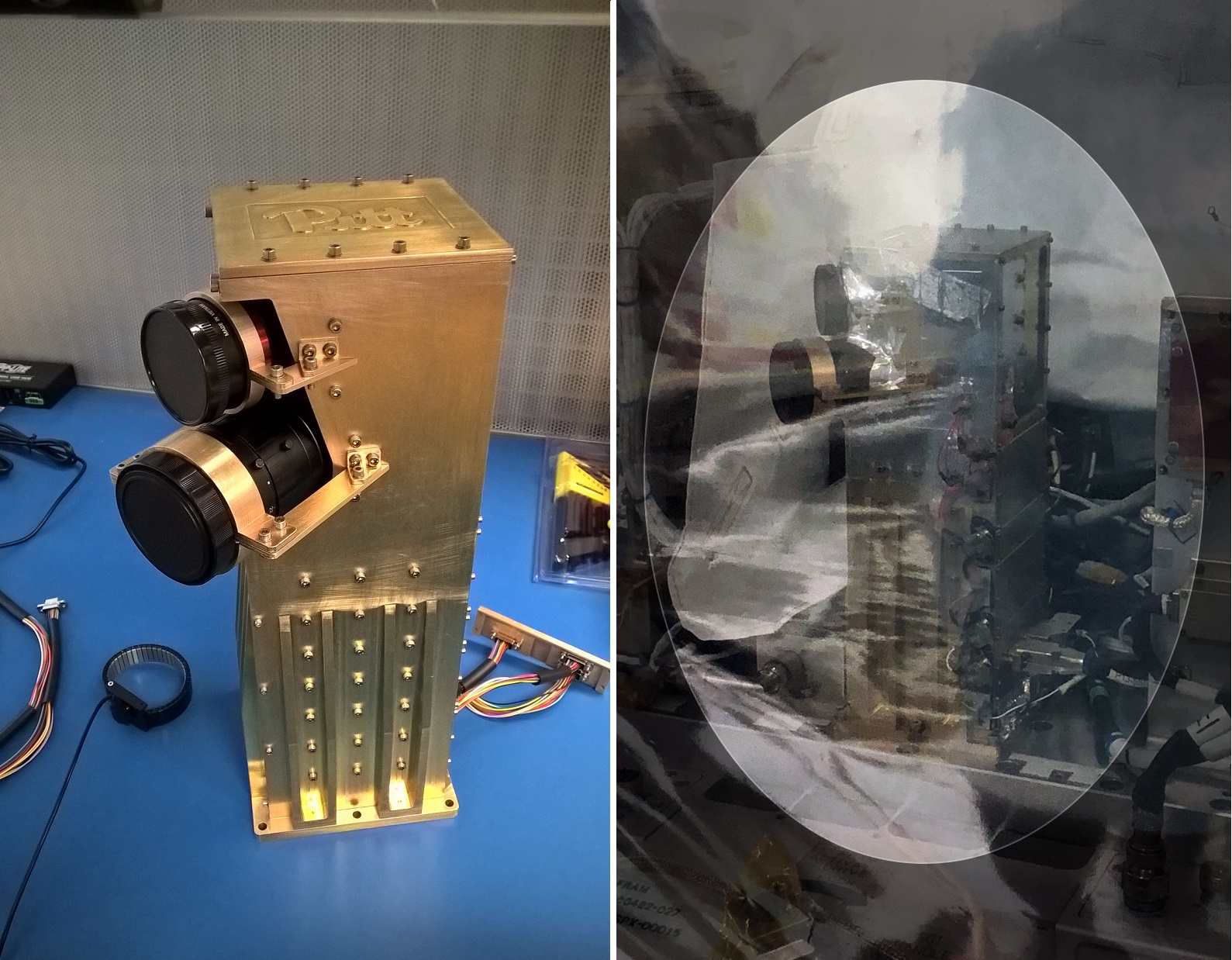 The SSIVP system at the University of Pittsburgh (left) and a close-up of the system on the STP-H6 pallet (right, edited for clarity) at NASA Kennedy.
Credit: (left) Swanson School of Engineering; (right) NASA
The STP-H6 pallet, including Pitt’s SSIVP system, completed integration and testing at NASA Johnson Space Center in Texas last spring. Further environmental testing took place at NASA Langley Research Center in Virginia over the summer. The pallet is at NASA Kennedy this fall for final integration and testing before launch in February 2019.

“We collaborated with a team of Pitt mechanical engineers led by Professors Dave Schmidt and Matthew Barry to design and build our enclosure to meet NASA requirements,” says Dr. George. “They managed mechanical design challenges and ensured the system was safe and could dissipate heat generated by the high-performance electronics.”

A team of ECE students assembled the SSIVP enclosure and electronics in a cleanroom at the Spacecraft Assembly Lab at SHREC. The enclosure, a golden outer case emblazoned with the Pitt script, can be seen in the middle of the pallet.

The SSIVP team traveled to NASA Goddard Space Flight Center in Maryland to conduct environmental testing to assess the SSIVP payload’s ability to survive the vibrations of launch and the thermal vacuum of space. The team also traveled to NASA Johnson to integrate and validate the SSIVP payload on the STP-H6 pallet and NASA Langley Research Center to program and validate the final flight software.

“We handled testing for the power systems to characterize our payload and ensure conformance with NASA and Department of Defense standards,” says Nicholas Franconi, an ECE PhD student on the SSIVP team. “We delivered and integrated the SSIVP payload this past spring and are excited to see it launch in spring 2019.”

The STP-H6 pallet is headed for the ISS via a SpaceX rocket. Once aboard the space station, it will join its predecessor STP-H5, which launched in 2017. The SHREC team developed a payload for the H5 pallet as well, and the two systems will work on a variety of space technology experiments conducted by the Pitt engineers.

Pitt Engineers Get First Look at Next Project Bound for ISS