Each year, monarch butterflies make their way from the U.S. and Canada to central Mexico, where they'll spend the winter. Inhee Lee, assistant professor of electrical and computer engineering at the University of Pittsburgh's Swanson School of Engineering, partnered with researchers at the University of Michigan to create a tiny sensor to track and monitor the environmental conditions the butterflies encounter on the way.

"We had to create a sensor small enough to be glued to the butterfly, which presented challenges for how to power it," said Lee. "We created a sensor that operates on very little power, has a small battery, and contains a very small solar panel to recharge the battery."

The information collected by the sensor will help researchers understand the environmental conditions along the butterflies' path and inform where to focus conservation activities.

Story originally appeared on the Michigan Engineering News Center from The University of Michigan. Reposted with permission.

In Mexico, days before the COVID-19 shutdown, a team of engineers and biologists were riding on horseback into the heart of a popular overwintering site for monarch butterflies to conduct preliminary tests on their newest iteration of the Michigan Micro Mote (M3). The project, supported in part by National Geographic, hopes to aid wildlife conservation efforts by shedding light on butterfly migration and habitat conditions.

The M3, created by David Blaauw, Kensall D. Wise Collegiate Professor of EECS, and several other University of Michigan researchers, is a fully energy-autonomous computing system that acts as a smart sensing system and can be configured for a wide variety of applications. For this project, the M3 will be glued to the back of individual monarch butterflies to track and monitor environmental conditions – specifically light and temperature and eventually air pressure – they encounter during migration.

“This is our most complex M3 system,” says Blaauw. “We need to capture data about the light intensity that is accurate down to a few seconds, and we need to be able to transmit that captured data a long distance because we will not be able to physically retrieve the specimens.” 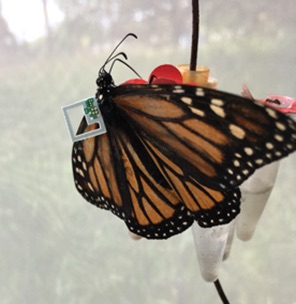 Blaauw and Prof. Inhee Lee, an ECE alum who is now at the University of Pittsburgh, are responsible for the chip and system design. Prof. Hun-Seok Kim designs and trains the algorithms that analyze the captured data and reconstruct the migratory path of the specimen. André Green, a professor of Ecology and Evolutionary Biology at U-M, analyzes these paths to learn more about monarch biology and applies this knowledge to conservation efforts.

Monarchs can travel as far as 3,000 miles during migration, spending the summer across the US and southern Canada to breed and the winter mostly in Mexico and along the coasts of California. The sensors have to be hardy enough to survive the long trip, as well as any inclement weather along the way, but light enough so they don’t disrupt the behavior or harm the butterflies. This iteration of the M3 is the lightest yet, weighing around 50 milligrams, which is tenfold lighter than the lightest tracking devices to date. As part of the team’s preliminary tests, they attached M3s to several butterflies and monitored their condition in a greenhouse.

“All initial indications are that we’re not having strong negative effects on the butterflies,” says Green. “We found no significant difference in their metabolism whether they were carrying the sensor or not.”

The conventional method to study monarch migration involves attaching a paper tag to an individual butterfly and recovering the specimen at known monarch destinations.

“Using that technique, we can know only the starting point and ending point for the specimens we recover, which is a small percentage of the total,” Lee says. “But with our technique, we can actually track each individual’s complete path.”

In addition to tracking the entirety of an individual monarch’s journey, this will be the first time it’s possible for conservationists to see how day-to-day environmental conditions impact their behavior.

“We’ll be able to see what types of habitats they actually spend their time in,” Green says. “That will help inform where we should focus efforts for conservation activity.”

Monarchs are particularly important for conservation, for they act as a sentinel species. Since monarchs travel to many different locations, they show us how the collective impact of human activities affect the wellbeing of an entire population.

One of the biggest challenges has been figuring out how to pinpoint a monarch’s location, for a GPS is too large and heavy to include in the device.

“We can infer the data indirectly from other primitive ultra-low power sensors using a new data-driven framework,” Kim says.

The team uses deep learning algorithms and neural networks to evaluate the environmental data and infer the location based on matching conditions. The location model is created from data collected by nearly 300 volunteers who act as pseudo-butterflies. The volunteers, or citizen scientists, use sensors to collect environmental data along known monarch migration routes.

“Bicyclists travel around the same speed and the same distance as monarchs do in a particular day,” Blaauw says, “so we have volunteer cyclists take larger sensors with them on multi-day trips, and we use that data to check the algorithms. It’s a bit of a role reversal, for normally we use animals to model as humans in science, but this time we’re using humans to model for animals.”

“Working together with the volunteers is the most exciting part of this project,” Kim says. “It is a very rare opportunity to design an advanced machine learning algorithm using the data collected by K – 12 students and their families.”

The team is hoping to do a few preliminary deployments this fall in specific local areas (COVID-19 permitting), and another deployment next fall in more distant locations. They plan to scale up gradually to full deployment that covers the entire migration range over the next year or two.

This iteration of the M3 could be applied to tracking other species as well, furthering additional wildlife conservation efforts.

For more information on the project or how you can volunteer, visit https://monarch.engin.umich.edu/